Join a TDOR event or action to build the world we want to see. An interactive game show and performance

Let’s honor trans lives, celebrate trans existence, revel in trans resilience, and instigate a beautiful, radical trans future on Trans Day of Resilience and Remembrance! Join Forward Together and a handful of brilliant cultural workers for our abolitionist game show “Genderpalooza: Visionary Blitz”. It’s “Wild N’ Out” meets “Whose Line Is It Anyway” meets a whole lot of BIPOC trans joy! COVID sucks. Trump’s annoying. Let’s send one another virtual hugs and enjoy a night of laughter and inspiration. Don’t miss out. Watch the livestream on our Facebook page or RSVP below for a reminder email.

ASL interpretation and live captioning will be provided. L’lerrét Ailith is a Black trans writer, digital organizer, and storyteller originally from Baltimore, MD. She currently serves as the Echoing Ida Manager for Forward Together where she contributes to the development of a comprehensive media hub to foster and uplift the radical vision of Black narrative strategists. She got her start in organizing in Chicago as the Communications Manager for BYP100 where she was integral in building out a comprehensive communications infrastructure to support Black queer feminist youth organizing. After years of honing her skills through the Reframe Mentorship Program and working within the movement for Black Lives, she then moved to Los Angeles and served as the Communications Coordinator for the Black AIDS Institute before joining the Forward Together team. She is deeply devoted to cultural work and relies on writing and acting as her resistive mediums.

Hunter Shackelford (they/she) is a Black fat Southern storyteller, cultural artist, and gender shapeshifter. Hunter is a Data Futurist at the body liberation organization Free Figure Revolution, and the creator of the Fat Census. Read more of their work at HunterAshleigh.com

Mia S. Willis is a Black performance poet from Charlotte, North Carolina. Their work has been featured by Palette Poetry, The Offing, The Minnesota Review, homology lit, Narrative
Northeast, Slamfind, and others. Mia is also the author of monster house. (Jai-Alai Books), the 2018 winner of the Cave Canem Foundation’s Toi Derricotte & Cornelius Eady Chapbook Prize. Their debut full-length poetry collection is forthcoming. Connect with Mia on Facebook/Twitter/Instagram (@poetinthehat). SA Smythe (they/them) is a poet, translator, and assistant professor of Black European literary & cultural studies and Black trans poetics at UCLA. They are deeply invested in the coalitional project of Black life, Black study, and relishing other nonbinary experiences. Smythe is writing a collection of poetry, titled proclivity, about trans embodiment, emancipation, and a familial history of Black migration (between Jamaica, Britain, and Costa Rica). Their poetry and essays have been published or are forthcoming in Stranger’s Guide, We Have Never Asked Permission to Sing: Poetry Celebrating Trans Resilience, The Johannesburg Salon, Catapult, Feminist Wire, okayafrica, and elsewhere. @essaysmythe | essaysmythe.com

Originally from Cleveland, OH., Vita E. has been surrounded by the power of art since childhood. From then on, they made a pledge to use the art that inspired them to influence thought, change, and freedom to exist without apology. Vita’s passion as a Black Trans Femme artist has led to many milestones. She’s recently finished a summer role as percussionist and mentor for Creede Repertory Theatre, and drummer for the hip-hop musical, Once Upon a Rhyme, and the new musical, Medusa. She recently made her Off-Broadway debut as Violet in the world premiere musical, The Secret Life of Bees. Their response track to Janelle Monae, Hell Y’all Ain’t Talmbout, was included in Source Magazines, “10 Song Soundtracking the Black Lives Matter Movement.” Wriply Marie Bennet is a proud self-taught illustrator and activist/organizer, born and raised in Ohio. Her art and organizing started with the Trans Women of Color Collective and expanded when she traveled to Ferguson to stand with the community of Mike Brown and remind the world that all Black lives Matter. Wriply is also well known as part of the “Black Pride 4” — 4 Black queer and trans folks who were arrested for protesting LGBTQ white supremacy at the Stonewall 2017 Pride parade in Columbus, Ohio.

As an artist her work expresses the perseverance, power, strength, resilience, grace and beauty of Black Trans Women, Fems, G.N.C and Queer folks, and sheds light on the lack of national outcry surrounding an epidemic of Black trans death in America. Her art has been used in social justice campaigns, fundraisers and gallery shows, and made in the documentary film MAJOR!.

Xoài Phạm is a Vietnamese trans person who descends from a long legacy of warriors, healers, and shamans. Her life’s work is in dreaming new futures where we are all limitless, and she makes those dreams a reality as a poet, screenwriter, editor, and collaborative educator. Learn more about her work here: xoai.co. Catch her on Instagram @xoai.pham and on Twitter @xoaiwrites. 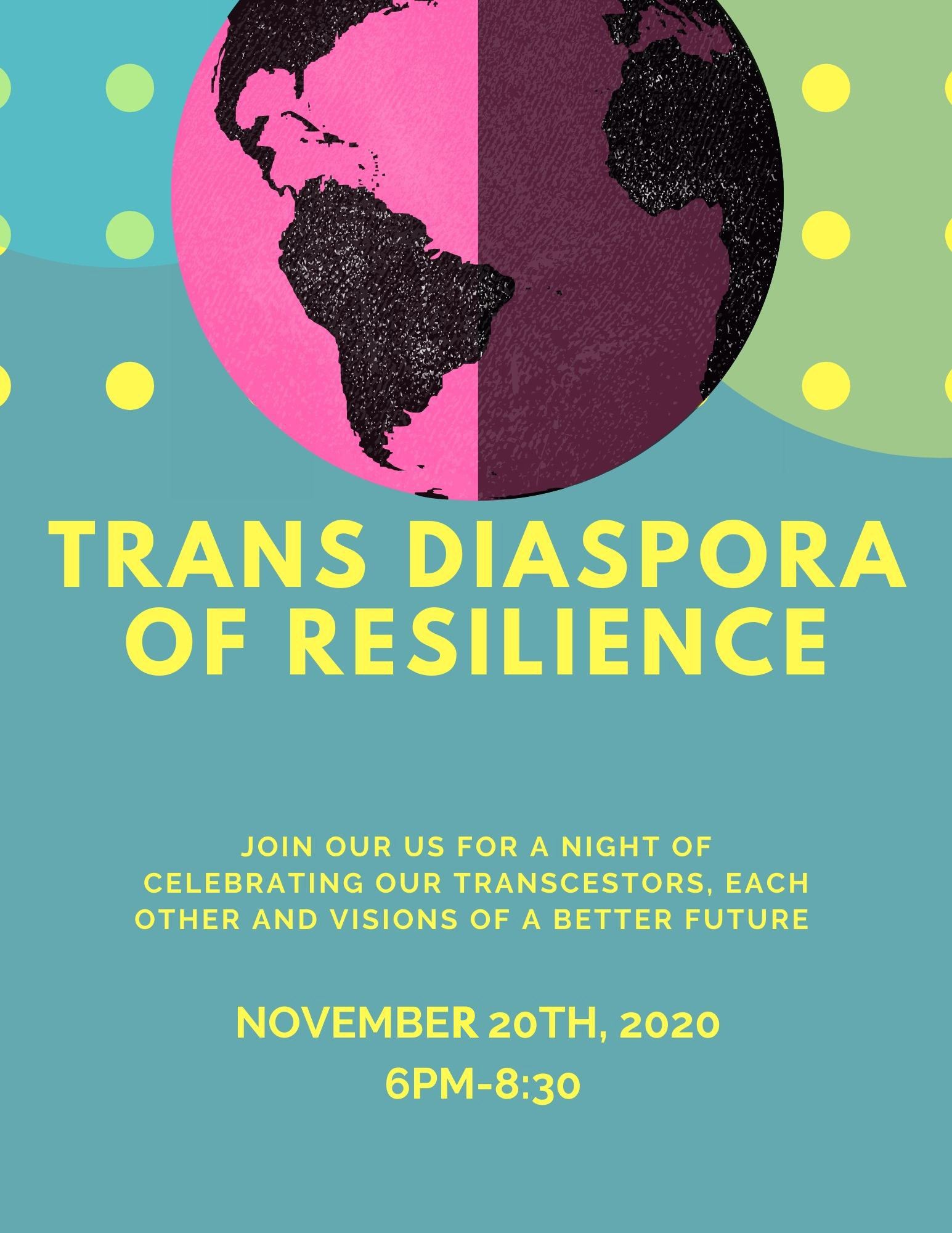 6pm PST, Friday, November 20
Join BIPOC trans community in Portland, Oregon for the Trans Diaspora of Resilience event. Black & Beyond the Binary Collective and Forward Together will celebrate our transcestors, each other, and visions for a better future. The evening will feature local trans and non-binary artists of color, care packages for trans folx, and collective grounding practices guided by a local healer. Internationally – Trans Day of Remembrance/Resilience and Trans Awareness Week commemorate the lives of trans women and all trans people who are no longer with us today, who have been violently removed from our lives. We hold them and we honor them, as we continue to fight like hell for the living.

Tune in to watch the conversation with six trans leaders from across the world and give a global context to Trans Diaspora of Resilience. The conversation will be shared on Friday, November 20th on all Familia’s social media platforms: Facebook | Twitter | Instagram A Community-Led Needs Assessment of Transgender and Gender Non-Conforming Asians and Pacific Islanders in the Bay Area!

WHEN: Sunday, November 22nd, 2-4pm PST
WHERE: Online (Zoom details to be available after you RSVP)
ACCESS: This event will be on Zoom. Professional closed captions WILL be provided. We will do our best to meet access needs shared with us on this form before Nov. 13th!

This event is the culmination of two-years’ worth of community-led research, analysis, and strategy-building. Through this project, transgender, non-binary, and gender-expansive APIs living in the Bay Area shared their experiences with police, searching for safe homes, surviving everyday harassment and violence, and finding the care we deserve. Rooted in these realities, needs, and desires, our Needs Assessment team has crafted recommendations that will help us and our community build the future we want.

This Trans Day of Resilience weekend, we are excited to share our learnings with our community partners, movement accomplices, friends and families, and assessment respondents. This is a time to commit to the safety and self determination of the trans people in our Pacific Islander and Asian communities. Will you join us? Brandy is a Black trans woman and a survivor of domestic violence. She was criminalized and incarcerated for defending herself from an abusive partner. Learn more, please give what you can and sign the petition to free Brandy.

Brandy is a beloved long-term member of TGI Justice Project, Survived & Punished, and the California Coalition for Women Prisoners. When released, Brandy is dedicated to fighting for trans, queer, and sex worker rights. She also dreams of implementing an after-school curriculum for gang members, which she wrote while incarcerated. Brandy is a sweet, loving, and thoughtful person who will be an asset to our communities. Rae Harris is a transgender survivor who has been incarcerated in California for over 20 years. In an example of the extreme and disproportionate sentencing of trans people of color, Rae was sentenced to two life without parole sentences and two 25-to-life sentences in 1998 for “conspiring to commit” two murders that he did not commit.

Please sign the petition asking Gov. Newsom to commute Rae Harris’ sentence from life without parole to a parole-eligible sentence.

Write to incarcerated survivors and let them know you support them and their freedom.
Visit the S&P Letter Writing Action Center for tips, tools, resources, and addresses. Syiaah Skkylit is a Black trans woman facing severe violence behind prison walls. She has been a victim of brutal, senseless violence at the hands of prison staff and others in custody. Many of these attacks are in retaliation for her advocacy for herself and other trans women. Syiaah has repeatedly asked to be transferred to a women’s facility and CDCR has repeatedly denied her requests.

Please help save Syiaah’s life by signing and sharing this petition for her immediate release. 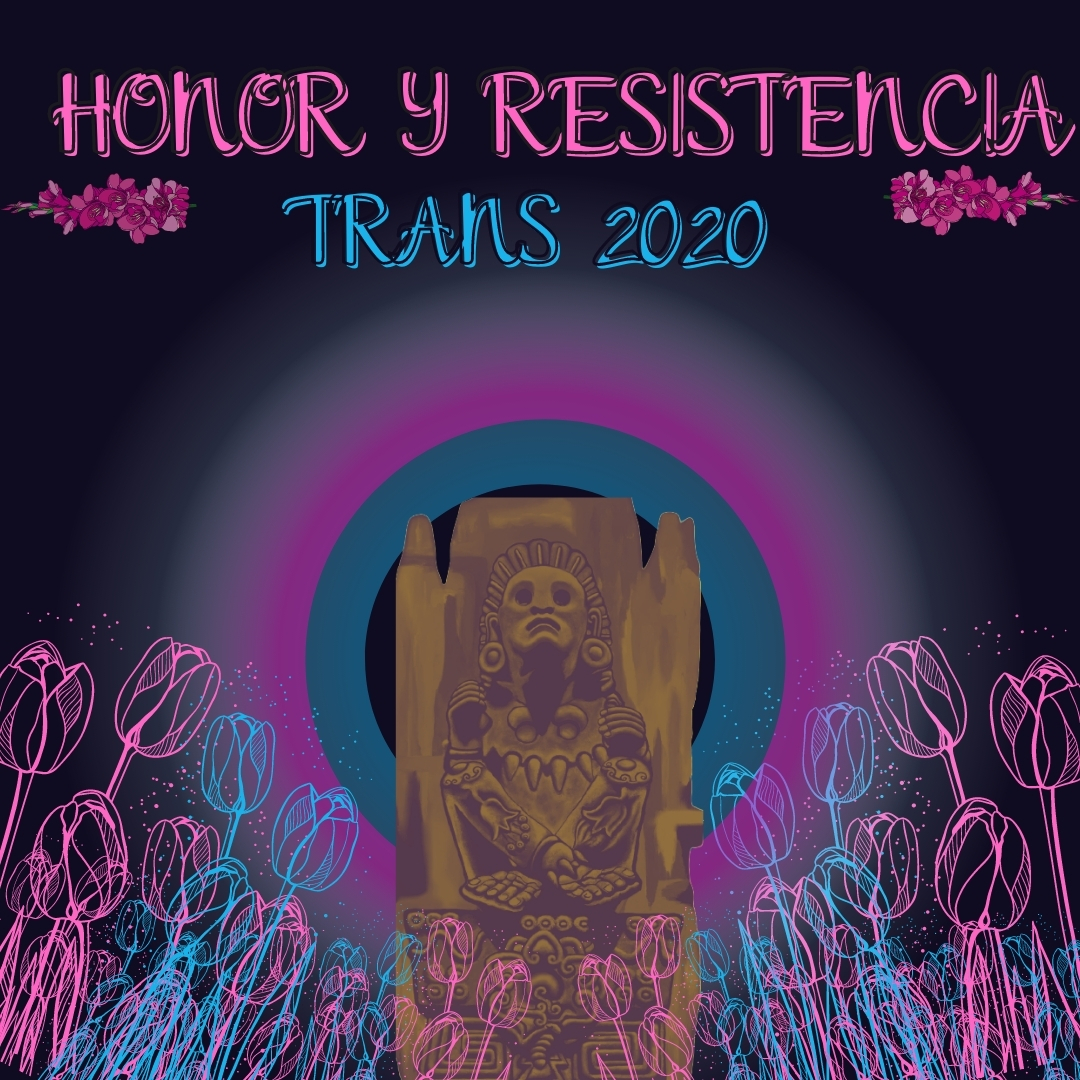 Join Trans Queer Pueblo and community in Phoenix, Arizona to honor our transcestors, celebrate trans and non-binary leadership and virtually gather together. On November 10th, TRUTH (Trans Youth) Program celebrated their annual GSA Day for Gender Justice with a Twitter townhall. See what youth had to say about this year’s focus: a call for the abolition of police, ICE, borders, and the judicial system.

You are all set to start getting our emails each month.

Thank you for sharing the message of social justice through art!

Trans people of color deserve a world of safety, support, and love. We Have Never Asked Permission to Sing, our TDOR poetry chapbook, features ten poems imagining this world.

Trans People Exist in the Future

Trans people of color deserve a world of safety, support and love. Imagine this world through our collection of original art and poetry. Free to download, the zine includes ten poems, selected art from seven years of the Trans Day of Resilience art project, and prompts to fuel your own dreaming.

RSVP for this event

Hosted by L’lerrét Ailith, this virtual TDOR event features artists, poets, activities and more. Connect with trans folks of color across the globe in this interactive show celebrating our power and possibilities.